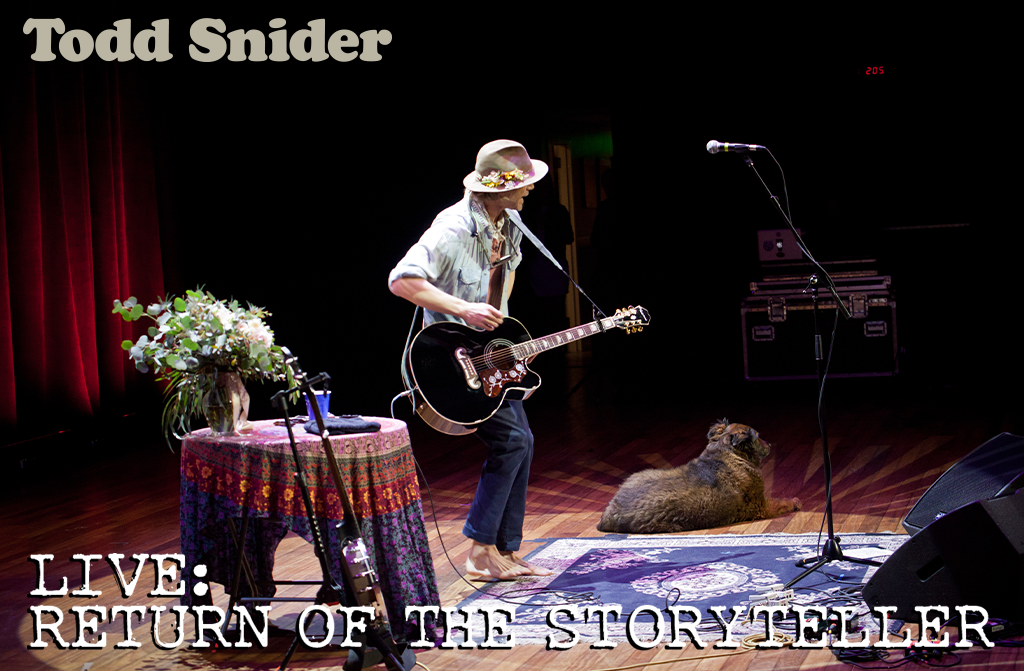 Live: Return of the Storyteller out 9/23

TODD SNIDER SHARES HILARIOUS AND HEARTWARMING SNAPSHOTS OF HIS FIRST SHOWS SINCE THE PANDEMIC ON UPCOMING ALBUM ‘LIVE: RETURN OF THE STORYTELLER’ (SEPTEMBER 23 VIA AIMLESS RECORDS / THIRTY TIGERS)

Todd Snider has announced ‘Live: Return Of The Storyteller’ (out September 23 via Todd’s own Aimless Records and Thirty Tigers), a brand new live collection of songs and stories captured during his first performances after venues opened back up last year. With material spanning from his 1994 debut album Songs From The Daily Planet through 2021’s First Agnostic Church Of Hope And Wonder, Snider uses much of his storytelling to pay homage to friends gone too soon including John Prine, Jerry Jeff Walker, Neal Casal and Colonel Bruce Hampton. But typical of a Snider live show, his stage banter also veers into one-of-a-kind road tales like conversing with haunted ghost children in California, raising hell with the inventor of Crocs in Montana and misadventures in the woods behind Johnny Cash’s house in Tennessee.

In conjunction with the album announcement Snider has also shared a new live version of “Just Like Old Times,” his 2006 fan favorite that was turned into a feature film – ‘Hard Luck Love Song’ – in 2020. Listen to “Just Like Old Times” from ‘Live: Return Of The Storyteller’ and watch the accompanying ‘tour diary’-style music video here:

Pre-order ‘Live: Return Of The Storyteller’ here, and become eligible for a chance to win a harmonica and guitar pick used by Snider on his 2021 tour: toddsnidershop.com

A successor in spirit to Snider’s 2011 collection ‘Live: The Storyteller’ – which found the New Yorker praising him for his “perfect timing, mastery of tiny details and sharply funny, lyrical songs” – the album was recorded between August and December of 2021 on stages across the United States. Musically it finds Snider reimagining a diverse array of his career-spanning material; adapting songs from his output with jam supergroup Hard Working Americans into folk-troubadour style, or channeling recent funk-inspired writing through inspiration from Jimmy Reed. Snider says:

“this album is dedicated to all the people
who come to these shows
whether this last tour was the first one you caught
you’ve been coming since 94,
or you joined the family somewhere in between
you have my undying gratitude
traveling and singing has been the great joy of my life
and it’s not lost on me who makes it possible
thank you.”

Snider has also just announced a dozen new dates on his 2022 ‘American Troubadour Tour,’ which will include a September 24 album release show at Nashville’s Ryman Auditorium and dates alongside legends like Robert Earl Keen, Ray Wylie Hubbard and Ramblin’ Jack Elliott (who joins Snider at The Ryman). As of today all of Snider’s 2022 tour dates are currently on sale, with a full list below.

‘LIVE: RETURN OF THE STORYTELLER’ TRACKLIST

New 2021 Tour and Live Album in the Making

Big Finish (Live) out now
New 2021 Tour and Live Album in the Making
Login to Todd Snider (Official Website)
Reset Password
Enter the username or e-mail you used in your profile. A password reset link will be sent to you by email.